Student of the Year Award

Student of the Year Award 2020

Charu is Science Co-op's 2020 Student of the Year Award winner.

Charu Sankaran is an Integrated Sciences student, who has completed two eight-month work terms with the Science Co-op program. She completed her first and second co-op work-terms as a Research Assistant under the supervision of Dr. Kevin Hay at Terry Fox Laboratories (BC Cancer Agency) studying Chimeric Antigen Receptor (CAR) T-cells. After a successful completion of her first two work terms, Charu continued to further her learnings in research when she was hired as a Lab Research Assistant on an 8-month work term at the Faculty of Veterinary Medicine at the University of Calgary under the supervision of Dr. Hermann Schaetzl to study prion diseases.

While at Terry Fox Labs, Charu developed two different strategies to improve CAR T-cell lifespan and produced a lentiviral vector to infect cell lines and ultimately human T cells, to test the efficacy of her constructs. During her co-op placement, she was able to develop two new CAR T-cells as well as establish Dr. Hay’s new laboratory space. As such, Dr. Hay invited Charu back to complete her Honors Thesis after the completion of her co-op journey.

At the University Calgary, Charu’s research topic was focused on how chaperones known as Hsp110s are involved in the pathogenesis of prion diseases, a fatal infectious neurodegenerative disorder. It was within two months of starting in this role that the lab closed due to the pandemic and Charu’s role moved from the lab to work-from-home. As a result, the nature of her work shifted too and Dr. Schaetzl tasked her with completing a systemic literature search for a review article. As part of this new task, Charu screened close to 6,000 paper titles and 300 abstracts, narrowing their selection to 30 papers. Additionally, she contributed to writing the Introduction and specific subsections as well as preparing the figures and completing the editing process. The review was published in September 2020 and is titled: “From seeds to fibrils and back: Fragmentation as an overlooked step in the propagation of prions and prion-like proteins.”

In her latter role, when Charu transitioned back to the lab, she completed critical experiments for a primary research manuscript and contributed to writing the Introduction and Materials and Methods section as well as helping prepare supplementary sequencing figures. Moreover, in the lab, she worked on an important CRISPR Cas9 knock out to help complete the data. The latter manuscript is expected to be submitted for publication for the summer of 2021. Charu found her experience in manuscript preparation to be invaluable and feels incredibly grateful for the opportunity to be part of two published manuscripts.

Leadership and Giving-back to the Campus Community

Currently, Charu is in her final year at UBC completing both an Honors thesis and a Work Learn position with Dr. Hay. She is also the VP Admin for UBC Integrated Sciences Student Association (ISSA), often sharing her Co-op experience on ISSA’s Blog, at various events such as Imagine Day, Meet your Major and through many one-on-one student mentorships.

Through the Co-op program, Charu feels that she has grown and become a strong, calm, and hardworking individual, able to overcome any challenge that comes her way. Thanks to the support and guidance of both her Co-op supervisors, Charu will begin graduate school with Dr. Hay in the Interdisciplinary Oncology Program in the Fall of 2021 at UBC to further her career and knowledge in the field of cancer immunotherapy. 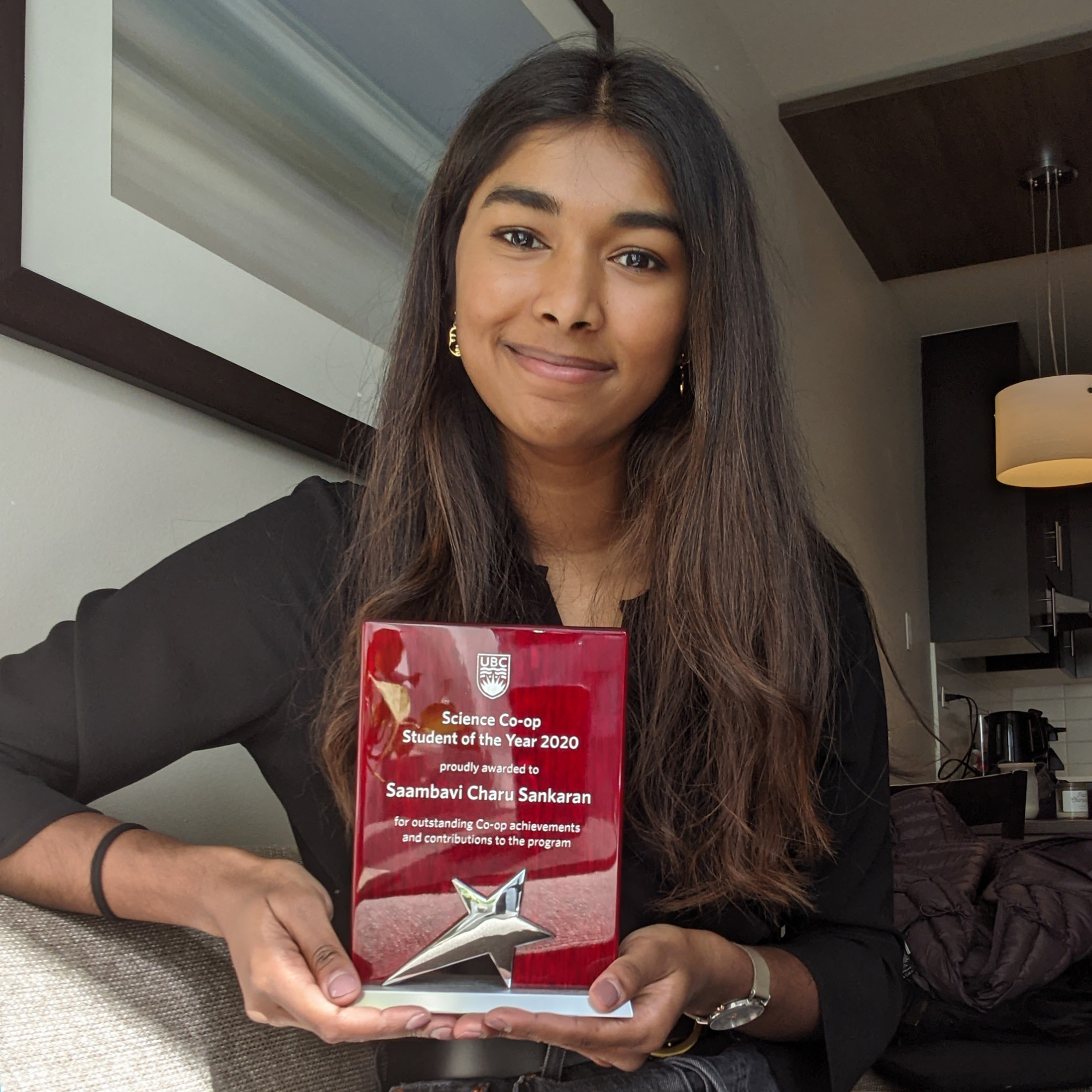 The purpose of the UBC Science Co-op Student of the Year Award is to recognize a recipient’s achievements in their job performance, academic performance, contributions to the UBC community or their employer, to Co-op education, to the general community and their involvement in extra-curricular activities.

Candidates are evaluated based on their impact to the three main stakeholders of co-operative education. Each criterion carries 1/3 of the overall score, out of 90.  Subsequent review within the committee of the merits of top candidates (based on initial scores) helps to determine the winners.

Candidates may self-nominate by completing the application themselves or be nominated by
a fellow student. A Co-op Coordinator from the Faculty of Science may also nominate students.

Nomination packages should contain the follow items presented in the order below:

Submissions are now closed. The Student of the Year will be announced in March 2021.